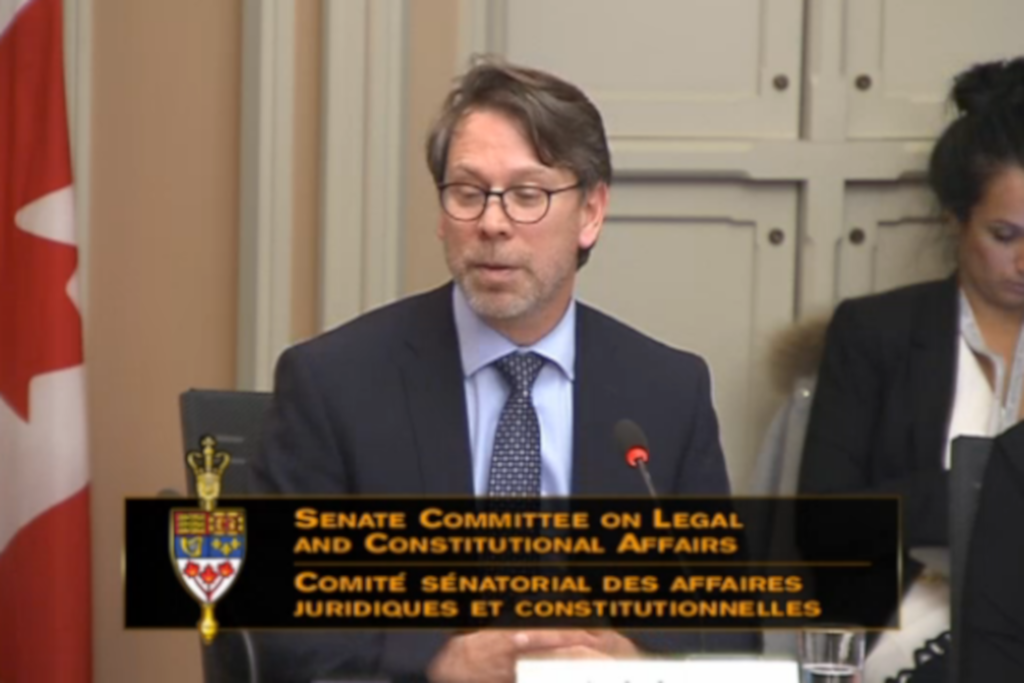 Head of Elections Canada Stéphane Perrault appears before a Senate committee on Nov. 28, 2018. /Screenshot via SenVu

The head of Elections Canada is urging the government to give the privacy commissioner jurisdiction over complaints under proposed legislation that will compel political parties to have, and make public, privacy policies — a call that previously fell on deaf ears.

Stéphane Perrault told a Senate legal and constitutional committee on Wednesday that oversight in the Elections Modernization Act, Bill C-76, is “close to nil” when it comes to enforcing privacy policies of the political parties, and that the Office of the Privacy Commissioner (OPC) should play a lead role in investigation of complaints on those matters.

The bill passed the House of Commons without that recommendation and is currently before the Senate, which continued its study this week.

“What is provided in this bill in terms of oversight is not really oversight of the application of whatever policies that the parties would have. It’s oversight of the fact that they have policies and that it’s published,” Perrault said.

“It’s hard to see how, beyond that, there would be any oversight that I could do of the application of that policy unless it’s a completely false policy that is never applied.”

The remarks reiterate recommendations made by Perrault to a House committee in May when he was acting chief electoral officer, replacing Marc Maynard.

At the time, Perrault provided the House committee with a table of proposed amendments to the bill, including at a minimum requiring parties to align their privacy policies with principles in the Personal Information Protection and Electronic Documents Act (PIPEDA), the country’s private sector privacy law. He noted that the bill contains no external oversight of parties’ compliance with their privacy policies.

The legislation proposes a relocation of the Commissioner of Canada Elections to within Perrault’s office — who will appoint the commissioner — to investigate complaints on the collection, use and disclosure of personal information by political parties, but does not include the privacy commissioner in those matters. Parties found in violation of the new law risk de-registration, if passed.

“I do believe that there should be oversight and I do believe that the privacy commissioner, with his expertise on privacy matters, would be better situated,” Perrault said. “We both agree that this would be a preferable arrangement, certainly, than what is being proposed.”

Therrien has been vocal about the need for his office to be vested with such authority. In a June post on the commissioner’s website, his office recommended amendments to the legislation to include the “exclusive responsibility for investigating complaints” related to a political party complying with its privacy policy and its use, collection and disclosure of personal information.

Perrault’s reply was in response to a question asking his opinion about a previous recommendation made by the Canadian Bar Association (CBA) to involve the privacy commissioner on such investigations.

Last week, the association published recommendations that suggested the privacy commissioner be given a role to investigate matters.

“Complaints about privacy violations should be reviewed and resolved externally, by the Office of the Privacy Commissioner, and not by the parties themselves according to their own internal policies or by the Chief Electoral Officer,” the CBA said.

“If Parliament determines that, notwithstanding this concern, oversight should remain exclusively with the Chief Electoral Officer, as currently proposed, it should consider a statutory requirement for consultation with the Privacy Commissioner if a breach or a privacy complaint comes to the attention of the Chief Electoral Officer,” it continued, adding that the privacy commissioner should likewise alert the chief’s office about a complaint they receive.

Following the tabling of the legislation in late April, Therrien told this publication that the lack of oversight over enforcement of the privacy policies was a “flaw” in the bill.

Meanwhile, earlier this year, the House of Commons ethics committee released a report suggesting political parties should come under privacy legislation. They are currently not beholden to any of Canada’s privacy rules.