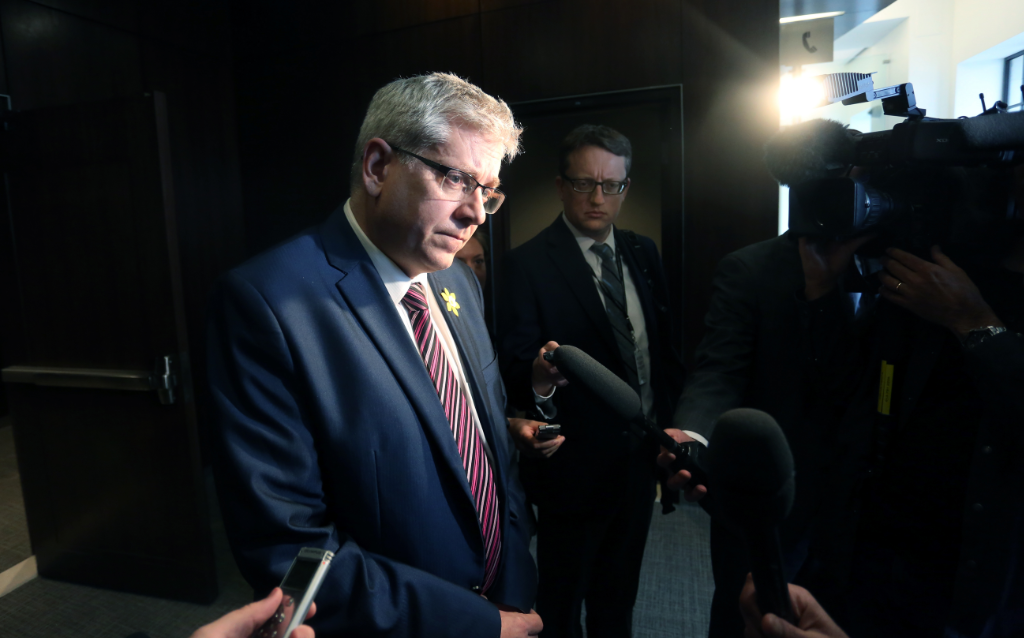 OTTAWA — A House of Commons committee is unanimously calling for new rules for social media companies that require them to quickly remove fake accounts and illegal content or face fines, and to increase transparency over their algorithms and political advertising.

The report is the result of a study by MPs into whether Canadians’ user data had been abused in the Cambridge Analytica scandal, which ended with MPs expressing frustrations about the secrecy among social media companies about their internal practices and vowing that their committee’s work investigating digital tech giants isn’t finished.

The House ethics committee is calling on the government to require social media platforms to take down illegal content in a timely fashion, including “hate speech, harassment and disinformation,” or else face financial penalties “commensurate with the dominance and significance of the social platform,” according to a report it tabled in Parliament Tuesday that makes 26 broad policy recommendations.

Some of those various policy suggestions echo a previous report by the committee, while others add new or more specific dynamics; for example, one raises questions about whether digital giants are appropriately covered by Canadian competition laws.

The committee has been studying the Cambridge Analytica data-breach scandal since April, soon after it was revealed data from millions of Facebook Inc. user accounts were allegedly used for political purposes.

Liberal MP Nathaniel Erskine-Smith said at a press conference Tuesday the federal government should be proactively legislating, rather than make laws “reacting to scandals” and “trying to play catch-up.”

NDP MP Charlie Angus said the committee’s initial investigation dropped them into a “dark and bizarre world” of online platforms, but he added it’s still too early in their work to make “really strong recommendations” at this point.

Conservative MP Bob Zimmer said this is just the start of the committee’s work on social media companies, privacy and online political influencing and pledged to keep “digging where we need to dig” with their international counterparts.

“We want to get to the bottom of the iceberg, and not just the tip,” he said, adding they will still seek to have Facebook CEO Mark Zuckerberg appear before committee despite numerous rejections at the Canadian and international level.

The committee report says the government should create new rules that would require companies to label content produced by bots, and introduce new transparency requirements for algorithms, possibly by having a regulator conduct algorithm audits, and for targeted political advertising techniques, such as psychographic profiling.

Angus said the committee is just beginning to look into various issues with digital companies that are still new to parliamentarians, such as algorithmic transparency.

“We understand now, for government policy, citizen’s rights, this is the new frontier. So I’m hoping in the new year that you will see that our committee will continue to work on some of these key issues that have to be discussed in a broader context.”

When it came to how those recommendations would mesh with the new trade agreement that will replace NAFTA — which restricts governments from requiring companies to disclose source code unless they are subject to a specific investigation — Zimmer suggested “Canadians’ privacy and data…is paramount to us, regardless of the USMCA. That said, it’s important we’re obliging that.”

The Liberal-dominated committee reiterated its previous call to pull Canadian political parties under existing privacy laws, despite a Liberal Party lawyer warning that could put a chill on political volunteers.

When reporters asked if folding political parties under privacy laws could be done in time for the next federal election in 2019, Erskine-Smith shrugged his shoulders and said that’s a question for cabinet. But he also said he’s “hopeful” the government will act once it figures out how to proceed.

“I’ve heard the [Democratic Institutions] minister say it is important political parties are subject to a privacy regime, but the government’s not entirely clear about how to proceed with that yet,” he said. “I do hope the government moves very quickly with respect to third-party political activities, which should be subject to PIPEDA, I think, in a straightforward way.”

The government must table its response to the report within 120 days, according to the House of Commons standing orders.

MPs of various political stripes also expressed concerns Tuesday over digital giants’ market concentration at the press conference, although they noted that area is mostly outside of their committee’s purview.

The report urges the federal government to examine whether it should update the Competition Act so it takes “non-price effects,” such as “data-driven” mergers, into account in assessments.

That was just one of a number of areas the committee recommended the government study, including addictive digital products, online disinformation and cyber threats to the electoral system.

When reporters asked committee members if they are concerned about foreign online influence in the next federal election, Angus said he’s “very nervous” about Canada’s electoral system.

“The kind of political hijinx we saw in 2015 or 2011 will look like stagecoach robberies compared to what’s going to happen in 2019,” Angus said.

“We see this from what’s happened in the U.S. campaigns, certainly in Brexit and the power of Cambridge Analytica and SCL — which, despite numerous, numerous hearings, we still weren’t even able to get to the bottom of how they all worked.”