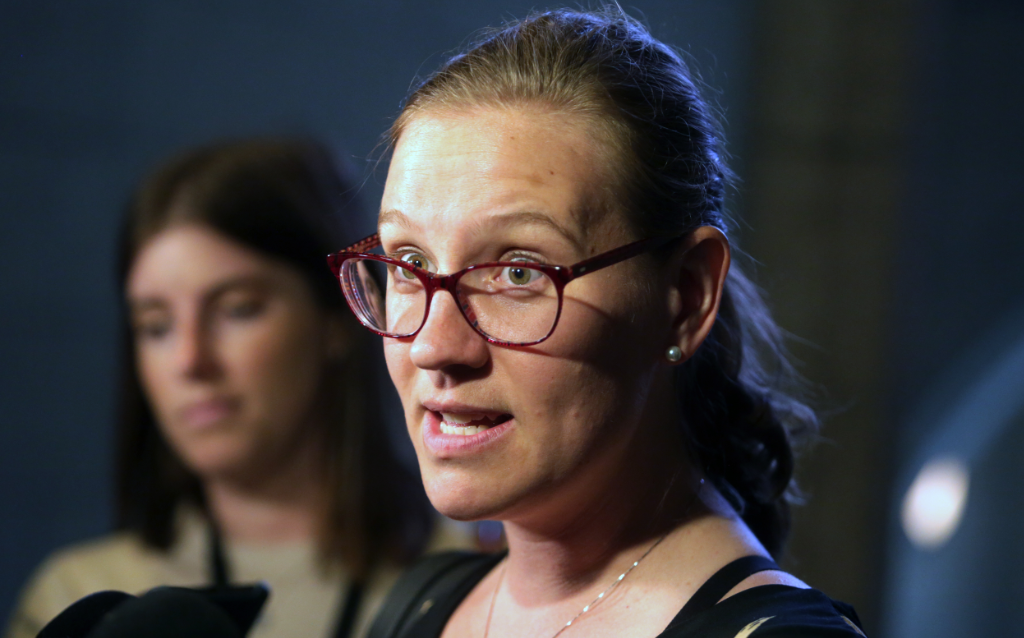 Minister of Democratic Institutions Karina Gould before question period on May 25, 2018. / Photo by Andrew Meade.

When asked about whether she simply “expects” online platforms to comply or whether the government should require them to act in removing hate speech, harassment and disinformation in a timely manner, Gould said she thinks the government is “moving in a direction where we need to require social media companies to act,” though she said that’s outside her current mandate.

“When we have very clear evidence that they’re contravening laws here in Canada, they should be acting responsibly in that manner,” she said, after being asked about a post on Facebook, that was still live, calling for the prime minister to be hung.

The comment to the House of Commons ethics committee, which recommended forcing online platforms to remove that content or risk monetary sanctions, comes after Gould took a slightly different semantic tack on Monday. At a panel on election security hosted by Carleton University, the minister used the word “pressure” to describe what the government is doing to get social media companies to comply with its rules.

The fourth pillar is “putting pressure on social media platforms to act responsibly,” she said on Monday, referring to the four major strategies the government announced last month and is using to ensure election security leading up to the big day in October.

But on a number of occasions since the government announcement, which said it “expects” social media companies to comply, the minister has kept to the same hopeful language.

When asked by The Wire Report following her testimony on Tuesday about the apparent discrepancy and what she meant by “pressure,” the minister said bluntly, “that’s reading too much into it.”

Committee members spent some time during testimony trying to understand where the government stood with respect to how it would ensure social media companies would abide by the rules. Under pressure from committee members asking about her confidence in the online platforms’ conformity to keeping an ad registry, for example, Gould said she has received assurances from Facebook Inc. and her understanding is that online platforms are trying to make it accessible to Canadians.

But she also said later that she doesn’t “have the assurances [from Facebook] that give me full confidence that they are going to be completely seized with this and doing everything necessary, which is why I continue to have conversations with them.”

Facebook head of public policy in Canada Kevin Chan said in a statement after Monday’s event, which he appeared at, that the company will comply with Canada’s elections legislation, including making public an advertising registry. Gould said the registry is a “really important step” and “the first time, to my knowledge, this has happened internationally.”