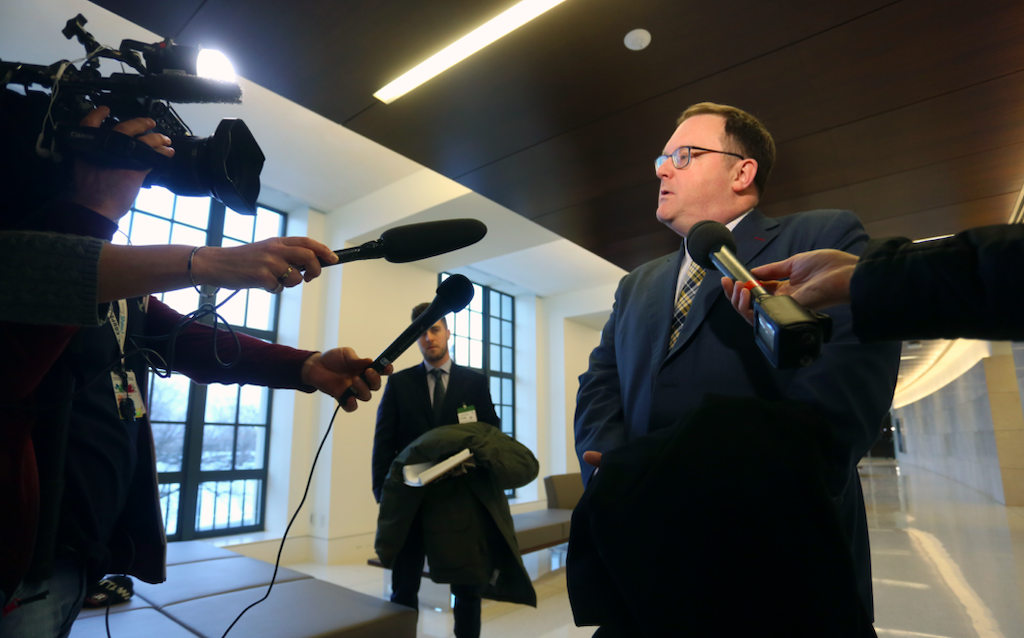 OTTAWA — It is now “very likely” that Canadians will face some form of cyber foreign interference, but it is “improbable” it will be on the scale of the 2016 United States election, according to a cyber update from the Communications Security Establishment.

The report, presented Monday, confirms sentiment following a G7 meeting last week where foreign affairs minister Chrystia Freeland said that it is likely that Canadians would see this kind of activity.

At a technical briefing on Monday, CSE officials noted that the sentiment is based on an upward trend and while it’s not a certainty, it’s definitely a probability. There has been a three-fold increase in the number of advanced democracies targeted by cyber threat activity since 2015, the report noted.

The influence is expected to take on the form of foreign entities attempting to sway ideas by focusing on social and political issues, promoting popularity of one party over another, or shaping public statements and policy choices of a candidate.

The updated report comes on the heels of the CSE’s threat assessment late last year, which suggested that the upcoming federal election was still ripe for opinion-shaping — despite the efforts to curb those influences by social media companies.

Last week’s G7 meeting resulted in a call for social media companies to redouble their efforts, such as ensuring bad content doesn’t fester on their platforms, according to a release.

“They need to enhance their technical capabilities to move faster, more comprehensively and more precisely,” the release said. “The big companies need to assist and support the smaller ones.  They need to be transparent and accountable. And they should expect public regulation—as Facebook has noted—if they fail to protect the public interest.”

The release also raised the spectre of the “ultimate discipline”: legal and financial responsibility for the harms that are caused by a lack of action.

Following the report’s release on Monday, Democratic Institutions Minister Karina Gould said during a press conference that she hasn’t made much progress in getting the assurances that social media companies will step up to curb foreign influence, including removing bad content. She said the same to an ethics committee in February, where she noted the government is trending toward requiring technology companies to comply and said she hasn’t received the assurances from Facebook Inc. “that give me full confidence that they are going to be completely seized with this and doing everything necessary.”

Facebook has so far said it will comply with a new election law that requires companies with certain traffic metrics to keep an ad registry for political advertisements transparent during the election period. Alphabet Inc. elected to just not run such ads. Meanwhile, the minister said Twitter Inc. has not given an answer yet as to whether it will follow the ad registry rules, though she noted it had established an ad transparency tool for the United States midterms last year.

Gould said Pinterest Inc., Reddit, and Microsoft Inc. are other companies they are talking to about the system.

Facebook on Monday said it will ban Canadian white nationalist groups and far-right figure Faith Goldy from its platforms, apparently in response to criticism that hatred is allowed to spread on its platforms, according to a report from Buzzfeed News and the Toronto Star.

The minister said on Monday that she’d like to see more transparency on the actions the companies are taking, as she said they are currently electing to only share information when they decide to.

“We would like to see more regular reporting,” she said.

Also on Monday, the United Kingdom’s department for digital, culture, media and sport, which is responsible for broadcasting and internet, introduced online safety laws. As part of the new rules, outlined in a white paper, an independent body will be appointed to enforce certain online practices under statutory “duty of care” principles on some companies. The intent is to keep online users safe from damaging content.

Digital secretary Jeremy Wright said of the new rules that the “era of self-regulation for online companies is over.”

Gould appeared to allude on Monday to the shortfalls of self-regulation. “Until they think they’re going to be forced to make those changes, I don’t think they will be willing to do it and that’s disappointing,” she said about social media companies. “I think there’s much more that they could do, and I think it gets at a lot of their core practices in terms of how their algorithms work [and] what their profit desires are.”

But she also warned about moving too quickly to implement regulations that may not keep with the brisk pace of technological development. “We don’t want…to regulate and legislate for something of the past and not be looking forward,” Gould said, noting technology moves very fast and the platforms “have been able to avoid being held to account for the activities that take place on their platforms for too long.”

Monday’s report also noted technology’s development that has enhanced the interference capability of these actors. The report notes improvements in artificial intelligence that has allowed for deep fakes, which seamlessly superimpose people in videos they are otherwise not involved in. The new techniques have made actors more “agile,” the report said.

Voters make up the largest target for threat activity against democratic processes, according to the report. The threat, however, continues against political parties, candidates and their staff, it said.

Short term consequences include burying legitimate information or polarizing social discourse, affecting popularity of or support for candidates, raising doubt as to legitimacy of the election process, and promoting a specific election outcome.

The increasing cyber threat environment has occurred despite “important countervailing trends,” which include media coverage, improved cyber security practices, and naming and legal action against threat actors. The cost of that to cyber threat actors, however, is not high enough to stop them, it said.