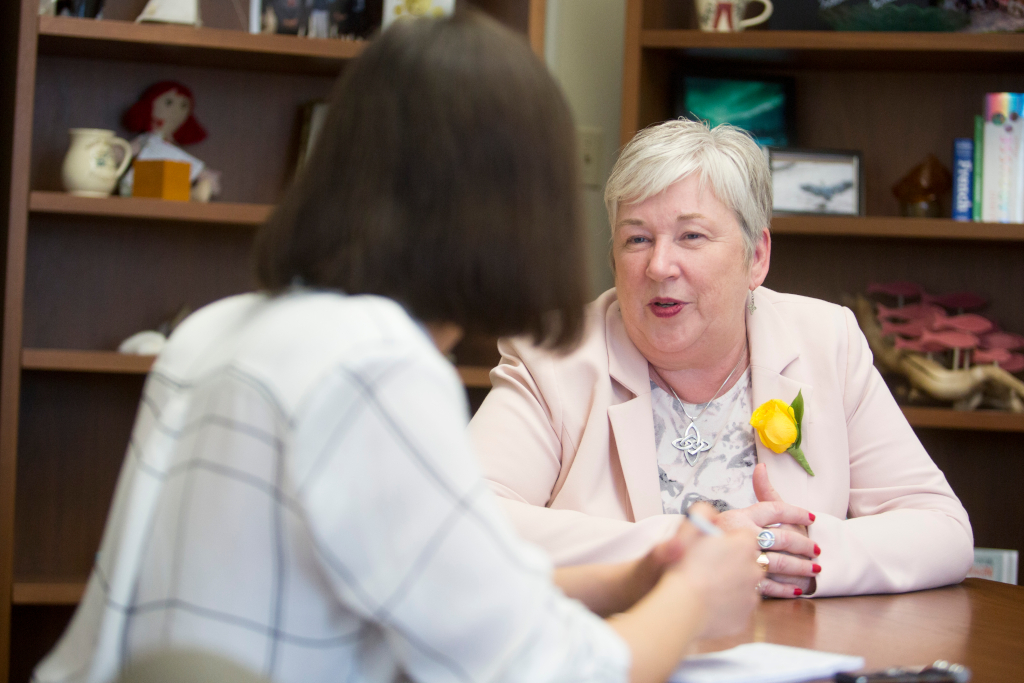 Bernadette Jordan, Minister of Rural Economic Development, is interviewed by The Wire Report on May 29, 2019.

The connectivity strategy released by Rural Economic Development Minister Bernadette Jordan Thursday morning reiterated the Liberals’ commitment to the promises made in the federal budget, but offered no new information about how those funds will be spent.

What the funding program for the $1.7-billion Universal Broadband Fund the government announced in March might look like will be determined after a consultation that Jordan said in a phone interview would be launched in the “very near future.”

She said the consultation process would look at how the program will be structured and “some of the challenges that we’ve already heard about and how we can best overcome them,” like more granular mapping or situations in which a small community doesn’t have the capacity to go through the application process.

Thursday’s strategy document says a second phase will follow the consultation, in which applicants will be invited to “provide solutions to connectivity gaps in unserved and underserved rural and remote areas.”

It also promises a “stable and predictable timeline” for funding that Jordan said would be detailed after the consultation.

“These are all things that we’ve heard about, but there may be other things that we didn’t, that we want to make sure we address all of the challenges. It’s basically taking Connect to Innovate and making it stronger and more robust,” Jordan said.

The Connect to Innovate program — a commitment to deliver and improve broadband connectivity in rural and remote regions — came under criticism from the auditor general in the fall, and ISED must report back to a Parliamentary committee on the progress it’s made to address issues with it by July 31.

The broadband strategy essentially confirms promises the Liberals made in their last pre-election budget: having 95 per cent of Canadian homes and businesses meet the CRTC’s basic service standard of 50/10 Mbps speeds by 2026, and then a full 100 per cent at that level by 2030, and outlining $6 billion in spending to get to that goal, including a $1.7 billion Universal Broadband Fund. The rest of the money is coming from a $1-billion commitment from the Canada Infrastructure Bank, which will also “leverage at least $2 billion in additional private sector investment.” Jordan said that figure is based on “conversations people have been having with the private sector.”

Another $2 billion is coming from the rural and northern stream of the Investing in Canada Infrastructure Program. The document also mentions the CRTC’s $750-million broadband fund and new investment coming out of the Accelerated Investment Incentive.

Jordan said the government “learned a lot” from the current Connect to Innovate program.

“There were some challenges in rural communities for them with things like mapping, with things like the applications process, so as we develop the Universal Broadband Fund, we’re going to make sure to take all of that into account,” she said.

The connectivity strategy indicates that the government will impose mandatory wholesale access to funded projects.

“The Government of Canada will consider affordability as an objective in connectivity programs. One way it will do this is by including it in the assessment criteria and requiring partners to maintain open access,” the document said.

An Innovation Canada official said in a phone interview that the current Connect to Innovate program already has such conditions in place for projects, which stipulate wholesale access and rates in cases where the CRTC’s rules mandating access don’t apply. Whether the conditions in the new funding program will differ will be determined during the consultation process, the official said.

One aspect of the new funding system that the document revealed was that the government would look to have available more detailed mapping data than the current, often criticized, hexagon model. That’s something Innovation, Science and Economic Development Canada previously confirmed to the The Wire Report it was working on.

“ISED is working with the CRTC to enable mapping data to be shared to the highest level of detail possible while respecting confidentiality,” the document said.

“We are aiming to definitely have more granular mapping. It was one of the main things we heard about as a concern from the Connect to Innovate Program,” Jordan said. “The hexagon system obviously has some challenges for smaller areas in order to apply, so we want to make sure we take the barriers out of the program so that it allows people to make applications to the programs.”

The document also indicated that the government is looking at changing the rules around regulation of passive infrastructure, such as electrical poles and towers. That’s something that has become an increasingly high-profile issue in the past six months and in the ongoing review of the broadcasting and telecom acts.

“The Government of Canada will engage partners to work to reduce these costs, so that networks are less expensive and can connect Canadians sooner. This involves reviewing policy and regulatory frameworks on antenna towers and support structures, considering related advice from the forthcoming review of communications legislation, engaging internally to advance the issue and promote best practices, and raising awareness of the issue among stakeholders,” the document outlined.

The CRTC has asked the government to make one regulatory body the ultimate decider on disputes over access to infrastructure, and some telecoms have called for the CRTC to be that regulatory body.

In response to a question about whether the government is considering giving that responsibility to the CRTC, Jordan said “those are ongoing conversations we’re having with telcos and with stakeholders as well as with the communities.”

The connectivity strategy was released alongside the government’s rural economic development strategy.

“They go hand in hand. You can’t have rural economic development without connectivity. So the goal today was to make sure that people recognize that we know how important it is for rural Canada, in order to continue to grow, to have that connectivity piece,” Jordan said.