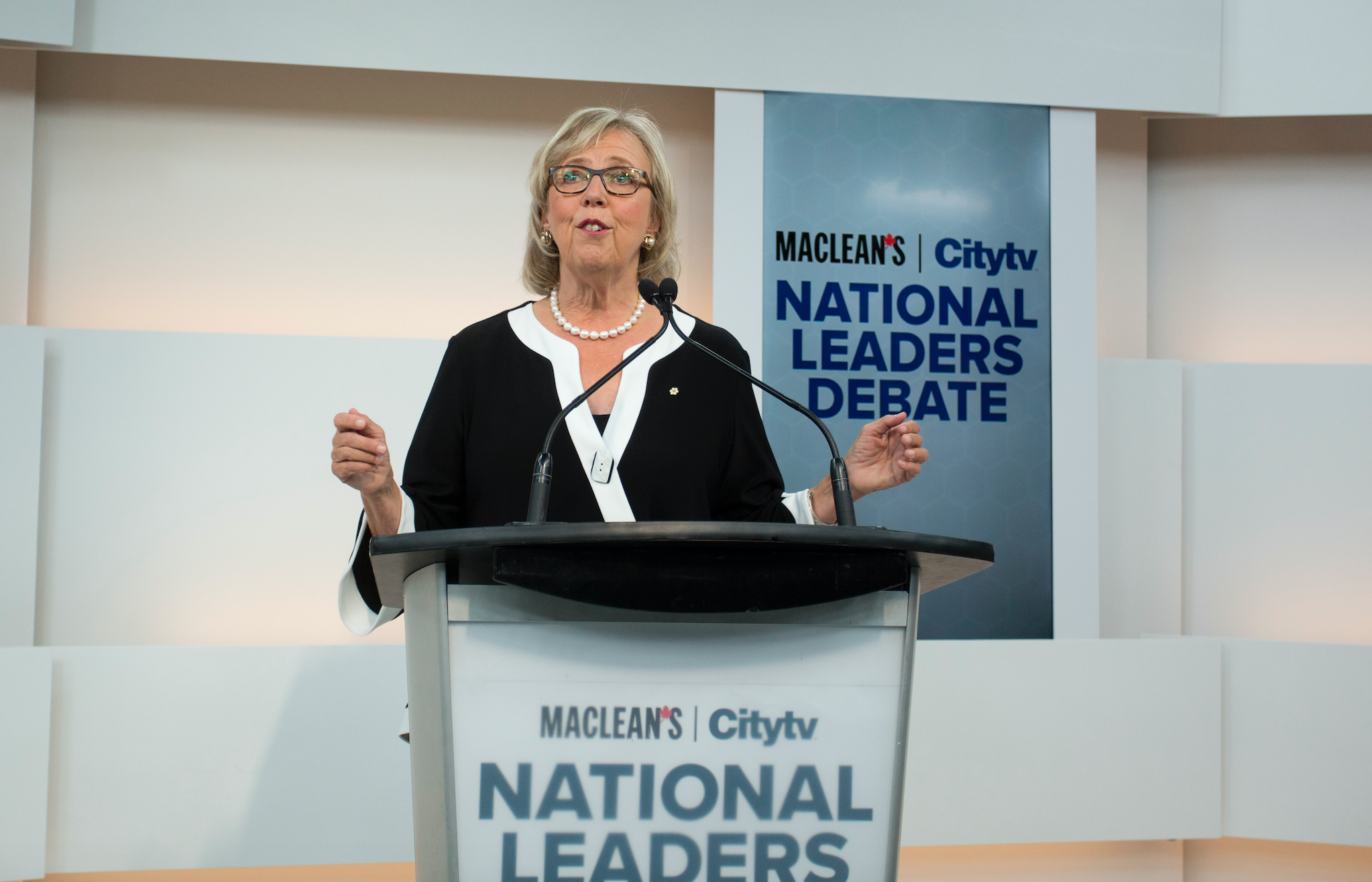 Green Party leader Elizabeth May scrums with reporters after the Maclean's CityTV leaders' debate in Toronto on Sep. 12, 2019./ Photo by Andrew Meade.

The Green Party election platform includes promises to ensure only individuals whose identities have been verified can set up social media accounts and indicates a Green government would require Parliamentary approval to continue the rollout of 5G.

The document, released Monday, says that the Greens would regulate companies like Facebook Inc. and Twitter Inc. to “ensure that only actual people, with verifiable identities, are able to publish on those platforms.”

A party spokesperson didn’t respond to questions asking for more details about the platform, including on how this proposal would work.

Lawyer Cynthia Khoo outlined that this would negatively affect those who need to use pseudonyms, including for safety reasons. She said in an email that it’s “kind of surprising and alarming to see a political party put forward such a recommendation today given the clear problems that ‘real name’ policies have routinely raised for marginalized and vulnerable users on social media.”

Another issue is the question of Canadian jurisdiction over international companies, Mendelsohn noted.

“I’m not sure how you can expect to regulate California-based companies to do that,” he asked. Internet regulation is generally minimal, partly because of those jurisdictional challenges, Mendelsohn said in a phone interview.

Such a law could also be challenged on the grounds that it infringes on freedom of expression, he said.

The Green Party platform also includes a promise that, if implemented, would make the rollout of 5G conditional on the approval of a Parliamentary committee. Should the Greens be elected this October, they are promising to: “Strike a parliamentary committee to examine the implications of introducing 5G technology, including security issues and impacts on weather forecasting, and make recommendations on how and if Canada should proceed.”

The Canadian rollout of 5G, the next generation of wireless connectivity, is already well underway, as it is in other countries around the world.

While many of its use cases will likely only emerge once it’s in place — as 4G made high-quality streaming video on wireless connections possible — 5G is expected to enable the growth of technology like the Internet of Things. It will also have significantly faster speeds than the current 4G networks. That means without 5G, Canadians would likely be unable to fully use some emerging technologies in the future.

The platform noted that the party “has concerns about the introduction of 5G technology and which companies should be involved in delivering this next generation of connectivity.” It didn’t specifically mention the controversy over whether there should be a ban on Huawei Technologies Co. Ltd. equipment from 5G networks, something the Conservatives have said they’re in favour of.

The platform, which references “predatory business practices of credit card and telecom corporations and banks,” also includes a number of other promises that would affect the Canadian media and telecom sectors. The Green Party is promising to change “CRTC regulations to increase competition in the provision of cellular and internet services to consumers and decouple payments for cell phones from cell services.” Both issues are currently under review at the regulator, with the CRTC looking at new device financing plans and gearing up for a hearing on its wireless policy.

The platform also says the Greens support the Liberal government’s connectivity strategy, promises to “guard against threats to net neutrality,” and to enact right to repair legislation.

It’s also promising a Parliamentary committee that would look at artificial intelligence. “Recommendations would form the basis of a legislative and regulatory framework to govern the ethical, environmental, social and economic implications of widespread dispersion of AI technologies,” the platform outlined.

In a section titled “protection of privacy,” the platform has a number of promises, in addition to the promise to verify all social media users. Mendelsohn — who noted that promise appears to be at odds with the idea of privacy protection — said that the rest of the promises are “quite reasonable.”

The platform outlines that the Greens would “require the Communications Security Establishment and CSIS to get a warrant before intruding on Canadians’ communications,” increase the powers of the privacy commissioner, implement the “right to be forgotten” and data breach notification rules covering government, political parties and the private sector, and look at how to modernize privacy laws regarding the Internet of Things.

The party also says that it would prohibit “cyber surveillance and bulk collection of data by intelligence and police agencies” and require “that internet service providers may only release data when required to do so by warrant, except in emergency situations.”

The party is also promising to increase funding to CBC/Radio-Canada until its per-capita funding is the equivalent of what BBC receives — about three times higher than what the CBC gets now. The Green Party would also reform the CBC governance structure “to remove the potential for political interference in board appointments.”

The platform also said the Greens would review film industry tax incentives “to ensure all parts of Canada are competitive and attractive to the industry, with incentives rising when Canadian artistic and technical talent are employed.”

The Greens also said they would change the rules so that social media platforms aren’t exempted from collecting taxes on advertising. Currently, taxes levied on advertising on foreign websites are tax deductible, even though taxes on ads in foreign newspapers and magazines are not.

The party would also ensure all government advertising goes to Canadian publications, and reform “anti-trust laws to enable the break-up of media conglomerates.”

A spokesperson didn’t respond to questions about whether it considers large broadcasters to be media conglomerates.

The Greens are the first federal party to release their full platform, though last week, the NDP held an event to promote their election promise to implement price caps for wireless services.

CLARIFICATION: This story has been updated to reflect that Khoo was speaking to the Wire Report in an independent capacity.