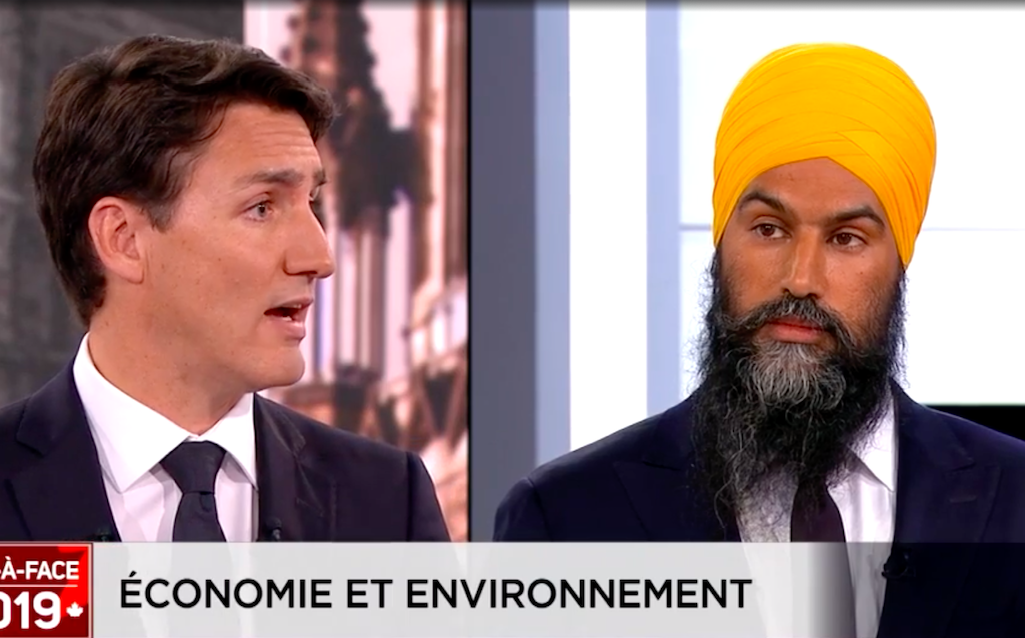 During the first French-language debate of the federal election campaign, party leaders promised to take on digital giants, even as they dodged answering how they would do so without angering U.S. president Donald Trump.

Moderator Pierre Bruneau asked how the parties that have promised to impose new taxes on foreign digital companies would do so “without falling into a new commercial war” with Trump.

Liberal leader Justin Trudeau acknowledged that in 2015 he had promised — under pressure from the Conservatives at the time — not to impose a “Netflix tax,” but said he would now introduce a three per cent corporate tax, as his party outlined earlier this week.

Trudeau said that he would now also put in place a sales tax on foreign digital companies, but as his government has previously maintained,  would first coordinate on a joint approach with other G7 countries and the OECD. Currently, digital companies without a physical presence in Canada — such as Netflix Inc.’s streaming service — don’t have to collect sales taxes, unlike their Canadian counterparts, such as BCE Inc.’s CraveTV.

“But we will do it,” Trudeau said.

NDP leader Jagmeet Singh positioned himself as the only leader with the “courage” to take on companies like Apple Inc. and Alphabet Inc.’s Google. Unlike the Liberals and Conservatives, the NDP has pledged to extend sales tax to foreign streaming services.

Singh said foreign companies currently enjoy an advantage over Canadian companies, and that this situation is hurting Quebec and Canada’s cultural sector.

“We’ll take on the injustice, while Mr. Trudeau and his government gave a big present to Netflix with a deal that didn’t have any protections for Quebec culture,” Singh said.

In 2017, the Liberal government unveiled a strategy for the creative sector, the centrepiece of which was a deal with Netflix that would see the company spend $500 million in Canada over five years. Netflix announced in late September that it has already met that level of spending, only two years into that time frame. The company was already spending money in Canada before 2017, and neither party has specified how much Netflix would have spent in Canada without the agreement over that time.

Scheer has yet to specify what that measure will look like, though he indicated in a press conference this week that it would not take the form of extending sales tax on foreign digital companies but be “about creating a level playing field on the corporate side of things.”

The leaders also tackled the issue of data and privacy, going over their platform promises.

Scheer pointed to his plan on privacy, including plain language agreements, while Trudeau touted his “digital charter.”

“We need to protect …. people’s digital privacy,” Singh said. In its platform, the NDP has promised to boost the order-making and enforcement power of the Office of the Privacy Commissioner.

Despite featuring in the NDP and Liberal platform, telecom affordability didn’t come up during the debate, the first of the campaign in which Trudeau chose to take part.

There are two more debates scheduled for next week — one English and one French — ahead of the Oct. 21 vote.

CORRECTION: The story has been updated to reflect that the Netflix deal is spread across five years, not four.