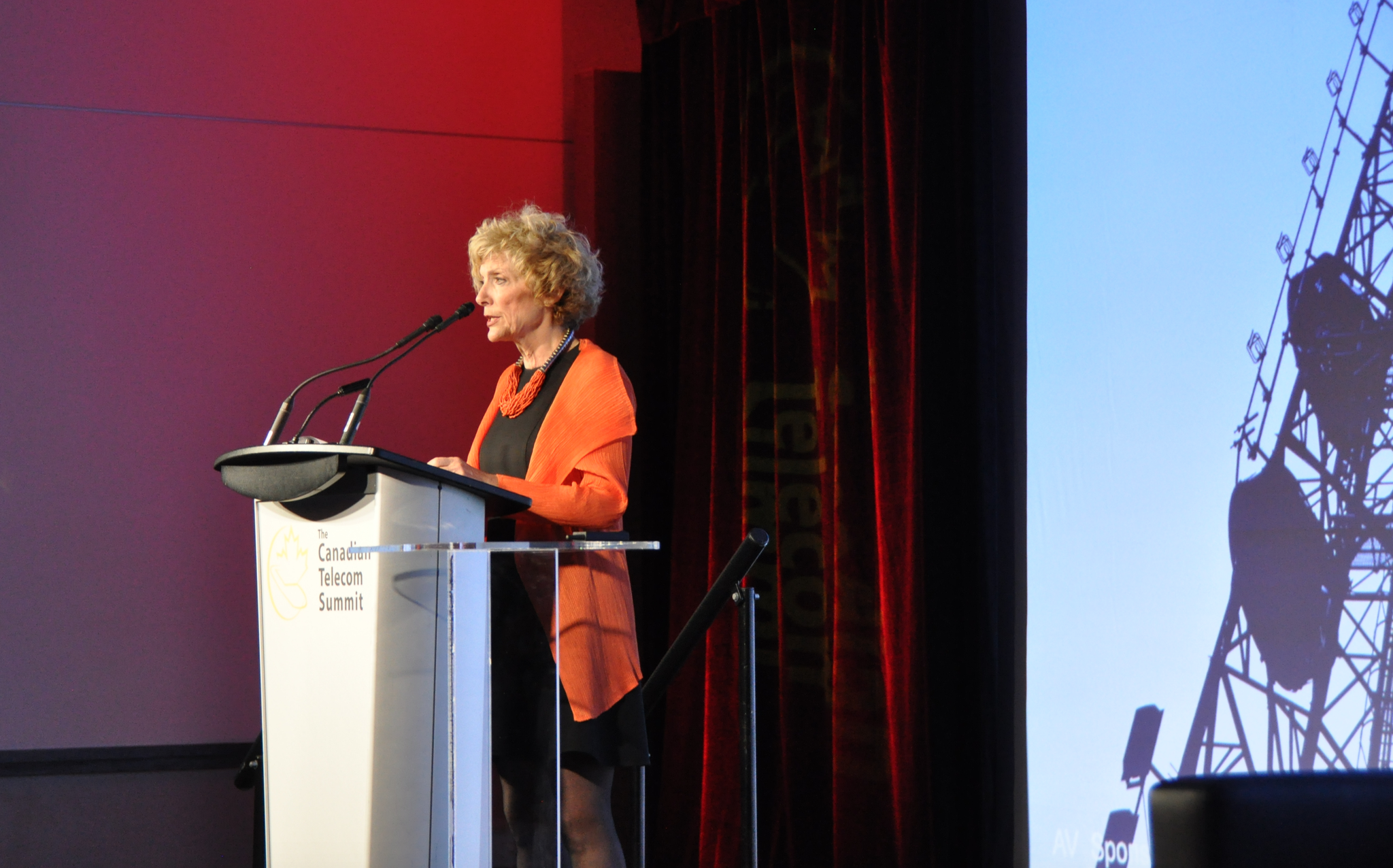 Janet Yale, chairwoman of the broadcasting and telecommunications legislative review panel, speaks at an industry conference in June 2019./ Photo by Anja Karadeglija.

The blue-ribbon panel tasked with modernizing Canada’s communications legislation is calling for “fundamental changes” to how the CRTC operates, including giving the regulator jurisdiction over online news and rules requiring large foreign digital audio and video platforms to contribute to and promote Canadian content.

The long-awaited, 200-page report from the broadcasting and telecommunications legislative review panel (BTLR) was released Wednesday. Among a wide swathe of recommendations — including new CRTC authority over passive infrastructure, annual updates on rural broadband, and changes to wholesale tariffs — it calls for companies such as Netflix Inc. and Facebook Inc. to be subject to the Broadcasting Act and for a new registration regime created and administered by the CRTC.

“Under this approach, any media content undertaking with significant Canadian revenues and delivering media content by means of the Internet would be required to register,” the report said, specifying registration would apply to both foreign and domestic undertakings, “whether or not they have a place of business in Canada.” It suggested a $10-million threshold in Canadian revenues. Broadcasters and TV providers would continue to be licenced.

The panel said the online platforms’ obligations to support Canadian content should vary depending on whether they are a curation-based service — such as Netflix or BCE Inc.’s CraveTV — an aggregation-based service — for example, an online TV service like Corus Entertainment Inc.‘s StackTV — or a “sharing” service, such as Facebook or Alphabet Inc.’s YouTube.

Chair Janet Yale told reporters in Ottawa Wednesday that the new rules are necessary even though companies like Netflix already make TV shows and movies in Canada.

“They are making productions in Canada that are service productions … and we think that’s very good for Canada from an overall economic perspective. It’s a thriving sector of the economy,” she said.

“But we believe there is a role for the creation, production, and discoverability of Canadian content. So we are not telling these companies what categories of programming ot invest in, we’re not telling them what their business model should be, we’re simply saying if you benefit… from the Canadian market, then you must make a contribution to Canadian content. And that means that the key creative positions must be held by Canadians.”

Curation services would have to “devote a portion of their program budgets to Canadian programs,” while aggregators and sharing services would be subject to levies. The report recommended the CRTC also “impose discoverability obligations on all audio or audiovisual entertainment media content undertakings, as it deems appropriate.”

The CRTC would decide who would contribute and based on which activities, but the report recommended the financial contributions be based on a “simple calculation of the percentage of Canadian-derived revenues.”

That would be on top of extending sales tax to foreign online platforms, which the Liberal government has said it plans to do and the panel supports. Internet service providers should not have to contribute to Canadian content, the report said.

News websites wouldn’t have to make such contributions, but would instead benefit from them. Under the recommended regime, those contributions would generate “sustainable funding for a wide range of news sources,” while new regulations would “ensure that creators of news are compensated for the use of their original content by online platform providers.”

The panel recommended that the “relationship between social media platforms that share news content and the news content creators be regulated to ensure the news producers are treated fairly where there is an imbalance in negotiating power.” More broadly, the CRTC should regulate the economic relationship between content producers and distributors, including terms of trade, it said.

Aggregators and sharing services should also be required by the CRTC to “promote the discoverability of Canadian news content,” the report recommended.

It also said the news tax credit introduced by the Liberals should be available to broadcasters and news delivered on all platforms.

The report called for the government and the CRTC not to wait for the implementation of updated legislation, but to move “immediately” on the sales tax recommendation and the new Canadian content contribution and discoverability requirements. The Liberals have also said they plan to introduce similar rules, but were waiting for the report for the specifics.

The report also said various levels of government shouldn’t wait to “roll out the announced funding for expansion of broadband.”

Its other recommendations included a five-year guarantee on funding for CBC/Radio-Canada, and that the public broadcaster get rid of advertising on all of its platforms within five years.

Yale said at the press conference that advertising and “the commercial imperative that goes with that” takes away from the CBC’s public interest mandate.

How much extra funding that would take would be left to the government. Yale said that is “something that would be negotiated between CBC/Radio-Canada and the government as part of a five-year operating agreement that we recommend be put in place so that there is stable, long-term funding.”

The panel also wants to add the “provision of national, regional, and local news” and “reflection of Canadian perspectives on international news” to the CBC’s mandate.

Yale said  the panel focused on “gaps in the mandate from the perspective that we were looking at in terms of the crisis in news in particular, where we believe that the best way to address misinformation and fake news is to have accurate, trustworthy and reliable sources of news.”

The review panel also tackled a wide range of issues on the telecom side, including a number of new policy objectives for the telecom act.

A universal service objective should be a “first priority,” it said. Additional objectives, among others, should affirm a “user right to an open internet,” as well as “include the promotion of security and reliability of telecommunications networks and electronic communications services.” Another policy objective should state that “all Canadians, including those with disabilities, should have timely, affordable, barrier-free access” to advanced telecommunication, the panel recommended.

The panel called for more transparency on rural broadband, in the the form of a requirement by the industry minister to “submit an annual report to Parliament on the status of broadband deployment, including in rural and remote communities and with respect to Indigenous Peoples and communities.”

On the issue of prices, it said legislation should “be amended to require the CRTC to study the affordability of telecommunications services periodically and, if necessary, to implement measures to improve affordability for marginalized Canadians from diverse social locations.”

The panel also made recommendations about wholesale tariffs, suggesting that tariffs be renamed “reference offers” and set out not just rates but also required terms and conditions, “details of associated operational processes” and “service supply and quality conditions.”

The report called for the CRTC’s authority over passive infrastructure be expanded, including over all public property, such as street furniture, multi-unit buildings, and over access to support structures of provincially-regulated utilities, in order to “ensure non-discriminatory arrangements.”

The panel also had some more overarching changes in mind, recommending “reimagining” the role of the CRTC.

“More than an administrative tribunal, a renewed CRTC would have a proactive evidence based orientation that spots market distortions and systemic challenges early on, puts consumers in a position to advocate for themselves, and conducts monitoring and measurement that minimized the need for more invasive intervention,” it said, and called for the regulator to have a “much stronger research and analytic capability.”

That includes requirements that the regulator “prepare and publish reports and evidence-based information on key issues and trends.”

It would do this with fewer members; a maximum of seven commissioners in addition to a chair and a single-vice chair. All would be based in the Ottawa area, in comparison to the status quo where there are up to 13 members and regional commissioners are based across the country.

“In our view, having such a large number of Commissioners spread across five different time zones can complicate and delay the decision-making process,” the panel said. It also recommended the creation of a public interest committee to help advise the regulator and represent consumers.

The new responsibilities would be funded by fees paid by companies that fall under the broadcasting and telecom acts.

OTTAWA — Any content levy on internet giants, as the telecom and broadcasting legislative review panel recently recommended, could expose Canada to retaliatory tariffs under the new NAFTA,...

BTLR on telecom: a Q&A with Janet Yale

In a phone interview with Broadcasting and Telecommunications Legislative Review panel chair Janet Yale, The Wire Report delved into the panel’s recommendations on the future of Canada’s telecom...

VMedia Inc. says a recommendation from the Broadcasting and Telecommunications Legislative Review panel’s report that stipulates a primary reliance on “market forces” could stifle competition in...